Recently we talked with a customer that had a chance to check out the new Honda Civic Hybrid at Honda of Pasadena. And they we’re very 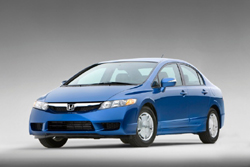 impressed. They told us they knew that hybrids were a good value and could save money on gas, but they didn’t realize just how much money could be saved. The civic hybrid gets an estimated 44 mpg in the city! Can you believe that? 44 mpg is double what I get now. Which means with this new hybrid, I would spend half as much money on gas. Which is a significant savings.

The exceptional gas mileage is not the only reason they liked the Civic Hybrid. We also showed theme some very cool features they didn’t expect to find in a hybrid. For example: factory-installed Bluetooth HandsFreeLink comes standard. So you can talk on your phone in the car and you don’t need a bluetooth headset. If you buy the optional built in navigation system, you get FM Traffic. A feature that alerts you to the current traffic conditions and guides you around heavy traffic with alternative routes. It is like Honda designed a car for my life he said. Hey went on to say “This Hybrid has incredible gas mileage, has built in bluetooth capabilities and can direct me around tough traffic stops. And let’s face it, living in the Pasadena, I can use any help I can get with traffic.”