2012 Honda Civic Gets Top Safety Pick
by Honda of Pasadena

When buying a new car people usually think about the safety of the passengers they will be carrying as well as themselves. If you are looking to purchase a new car this year you need look no further than the 2012 Honda Civic. The Honda Civic safety rating is impressive. 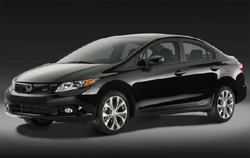 The new Civic also comes standard with Vehicle Stability Assist (VSA) including traction control formerly only available on the 2011 EX-L trim. Other standard anti-lock brakes (ABS) and side curtain airbags; dual-stage, multiple-threshold front airbags; a driver’s front side airbag; and a front passenger’s side airbag with an occupant position detection system. You can be confident that you will be safe when driving a new Civic knowing that the Insurance Institute for Highway Safety only recognizes the vehicles that do the best job in protecting all of their occupants.

Honda of Pasadena is a full service Honda dealership serving all of the greater Los Angeles area. We invite you in for a test drive of the 2012 Honda Civic and see why more people are loving this car.