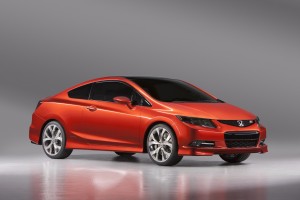 The 2012 Honda Civic Coupe is back with revamps on the exterior design, noticeable changes include a revised front grille, an enhanced front bumper and a kind of long, low roof line that boosts its aerodynamics. The awesome redesigning of the 2012 Civic coupe isn’t skin deep; it goes through the interior, with an attractive and unique media center console that lets you customize every feature on your new Civic coupe! Plus, this sporty compact car requires very little maintenance which drivers will appreciate after long drives with no breakdowns. The same is true with the 2012 2012 Honda Civic Coupe’s fuel economy, another desirable quality for one with such a great price.

Check out the new 2012 Honda Civic Coupe at Honda of Pasadena located at 1965 E. Foothill Blvd. Pasadena, CA 91107. Here at Honda of Pasadena, we make sure you are extremely happy with our service, whether buying a new car or truck, purchasing parts or accessories, getting your vehicle serviced, or just looking around. You may call us at (888) 882-3339 (Sales) or (888) 575-9577 (Service) where our knowledgeable staff of auto professionals will be glad to entertain you.  For more info on the 2012 Honda Civic Coupe, you can also check out our website! 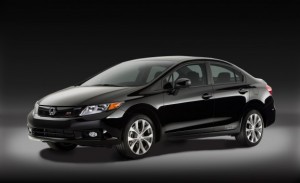 Check out the new 2012 Honda Civic Sedan at Honda of Pasadena located at 1965 E. Foothill Blvd. Pasadena, CA 91107. Here at Honda of Pasadena, we make sure you are extremely happy with our service, whether buying a new car or truck, purchasing parts or accessories, getting your vehicle serviced, or just looking around. You may call us at (888) 882-3339 (Sales) or (888) 575-9577 (Service) where our knowledgeable staff of auto professionals will be glad to entertain you.  For more info on the 2012 Honda Civic Sedan, you can also check out our website!

Legendary for reliability and coveted for gas mileage, the Honda Civic has built a strong reputation across not only the USA, but also around the globe. It’s no surprise that in Pasadena Honda Civics are common to come across. The 2012 Honda Civic comes complete with all the reliability and features that have made the line famous, plus a few new items that have Honda fans vying for a test drive.

Comparing the Trim
The 2012 Honda Civic comes in a total of four trim levels offering buyers a wide range of choices in the way of options, accessories and price. The baseline model (DX) starts at a MRSP of just $15,805. The upper end trim level (EX-L) comes with all the bells and whistles and a steep starting price of $21,995. In betwen you’ll find the LX trim starting at $17,855 and the EX trim starting at $20,505.

Honda has strict safety standards that tend to be identical across the board for all trim levels. These features include front and rear suspensions systems, front, side, and curtain airbags, stability assist, Anti Lock brakes, and a tire pressure monitoring system. All models feature car seat anchors and latches in the second row to make the model appealing to families. Another major feature is that all Pasadena Honda Civic models are partial zero emission model cars. 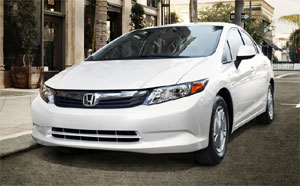