The 2014 Ridgeline hit the Honda of Pasadena dealership on November 13th offering Pasadena and nearby areas a look at a style and feature rich vehicle that screamed “drive me!” The Special Edition model joins the already versatile Honda Ridgeline lineup for 2014 that was first offered for sale back in September. 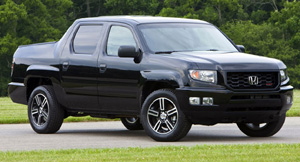 The Honda Ridgeline has brought together a number of features making it extremely appealing for anyone seeking the handling capabilities of a truck and the drive of a car. The Ridgeline offers a five passenger cabin, a dual action tailgate and an In-Bed Trunk. In addition to these special features, it also includes the standard Honda vehicle features such as keyless entry, rear view camera and a rear seat that offers under-the-seat storage. The Ridgeline Special also offers:

The Special Edition Ridgeline, which can now be seen at Honda of Pasadena, is offered in Alabaster Silver, Crystal Black and Taffeta White. Each of the color options offer a black leather interior.

If you are interested in the Special Edition Ridgeline, recently released for sale, visit Honda of Pasadena in Pasadena, California, today! Chances are it is only a short drive from wherever you may be!